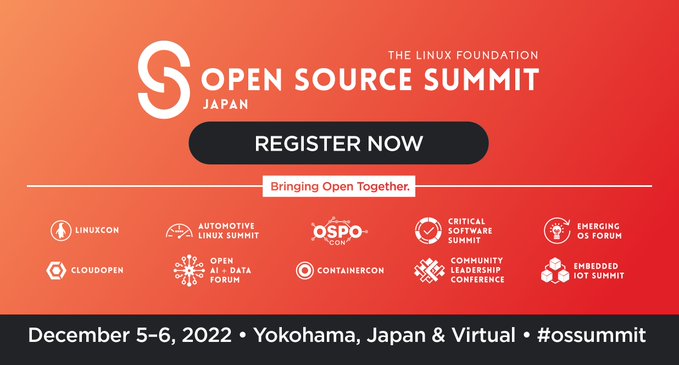 Open Source Summit Japan, hosted on December 5-6 in Yokohama, Japan and virtually for attendees around the world, is the premier event for open source developers, technologists, and community leaders to collaborate, share information, solve problems and gain knowledge, furthering open source innovation and ensuring a sustainable open source ecosystem. It is the gathering place for open source code and community contributors. Register here.

Zephyr will be represented at Open Source Summit Japan in several presentations including:

2-2:40 pm: Implement Safety with a RTOS Running as a Linux Companion Within the Same SoC – Stephane Desneux, CTO, IoT.bzh

Even though significant efforts attempt to prepare Linux for safety certifications, it seems obvious that these initiatives cannot deliver before years, if not decades, due to the magnitude of the work remaining. However, at the same time, the global automotive industry must comply today with many new certifications, including for cybersecurity (UNECE R155) and Over-The-Air software updates (UNECE R156) as well as those existing for safety (ISO-26262). This talk offers a pragmatic approach by leveraging existing hardware platforms and modern OSS software patterns to solve (partially!) certification issues related to safety, real-time and cybersecurity. This approach includes (but is not limited to) a small companion OS running within the same SoC (like Zephyr, FreeRTOS or AutoSAR) to perform certain critical functions. It also tries to use the latest techniques in containers and software isolation to satisfy security, privacy and safe updatability. Add it to your schedule here.

We’ll go over some of the key strategies adopted in the last 6 years, that have resulted in Zephyr being used widely in products in multiple market segments such as wind turbines, computers, hearing aids and more. These best practices for software quality, transparency, traceability & supporting security are now making it possible to aim for safety-critical applications as well. Add it to your schedule here.

This talk is a deep dive into the AMP/HMP topic showing both the Cortex-A as well as the Cortex-M4/M7 side of things. The first part looks at the various options how to actually launch code at various stages throughout the lifetime of a system, be it directly from a boot container by the boot ROM, later by the boot loader using U-Boot’s bootaux command or once Linux is booted on the Cortex-A core using the remote processor framework (remoteproc). How mainline Linux and Zephyr work in unison is covered in the second part by further discussing concepts like the remote processor messaging (rpmsg) framework using the virtio-based messaging bus which allows kernel drivers to communicate with remote processors available in the system. The third part looks at the communication library landscape where the likes of OpenAMP and RPMsg-Lite are covered. My talk is mostly SoC agnostic but concludes with a real-life demo using NXP i.MX 7/8M Mini and 8M Plus-based systems running the fully open-source software stacks previously introduced. A similar presentation was held at the Embedded Linux Conference in Austin in June.

Learn more about Open Source Summit Japan or register for the event on the main event website here: https://events.linuxfoundation.org/open-source-summit-japan/.