How to Create an Open Source Powered Air Quality Dashboard

Written by Jared Wolff, Hardware and firmware enthusiast and proud father of the nRF9160 Feather

Depending on where you live, your air quality can be a big deal. Whether it’s pollution from factories or particulates from burning forest fires, they’re not good for your lungs or overall health.

While there are plenty of air quality meters out there, it’s doubtful they’re open source never-mind reasonably priced. In this post, i’ll be showing you how to connect an Air Quality Wing, publish data to the web via Golioth and view your data in real time using Grafana.

So first, let’s get started by assembling hardware.

In this project, you’ll need a few things to get started.

Assembly is straight forward and only requires you to solder headers if you haven’t already. Here’s an example of using female headers on the Air Quality Wing.

Every Air Quality Wing comes with a set of male headers. One is 12 pins and the other is 16. 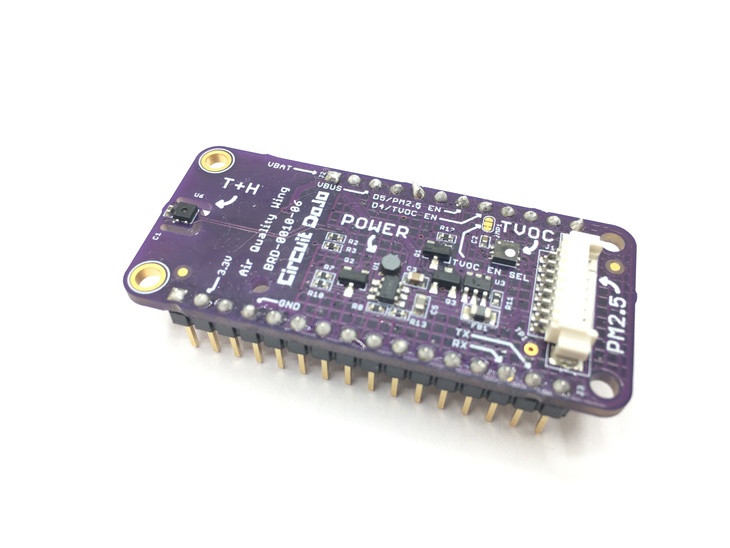 The best way to solder them is size them correctly, place them in a breadboard or already assembled doubler and place the board on top for soldering.

Note: Don’t spend too much time holding your iron to the pins as the breadboard is not meant for high heat usage!

You will also have to do a similar solder job if you use a Feather doubler. More on the assembly for that board can be found here.

In the end you should have a setup that looks something like this:

Setting up a device

Currently the Air Quality Wing works with the following boards:

Adding support for new boards is simple thanks to Zephyrs ability to target many hardware targets for the same core source code. In this sample we’ll be using the nRF9160 Feather since it can publish directly to Grafana. So here’s the instructions to getting the firmware up and running:

One of the main dependencies for Zephyr is Python. Instead of installing the required packages directly to your system, I highly recommend use a virtual environment instead.

First lets make a project folder. We can call it aqw:

If you don’t have virtualenv installed already, make sure you install it:

Set up a python virtual environment:

Then enable it by running:

west is the command line utility for Zephyr. You’ll need it to build the firmware.

Next we’ll download the source code and install the dependencies.

This will download all the dependencies. If there are ever fixes to this sample you’ll need to pull the changes and then re-run west update:

Finally, there are some important dependencies needed to build your freshly cloned Zephyr repository. Let’s install those here.

2. For Windows you can download and install the toolchain with this direct link.

That’s it for your SDK install! Next, we’ll want to generate credentials for your device and add them to the sample code. We’ll do that next.

First jump over to Golioth and create an account if you haven’t already. Golioth is in open beta which means anyone can join!

Once instead you’ll be prompted to create a project. So let’s do that now. I’ve named my project Air Quality Wing but you can name it whatever you want. Only unique project names can be used at the moment so you’ll need to name yours differently.

Make sure you click Save to continue to the next step.

Then click the Create drop down and then Provision with Credentials. You you should get a screen like the one below.

Change the device name to whatever you’d like. Change the identity to match if you’d like. (or leave it be) Finally, add your super secret pre-shared key. You’ll need the Identity and PSK for the next step.

If you’ve gotten this far, you have your device provisioned! Next is to add the Identity and PSK to the demo code.

Also, if you’re not using the PM2.5 sensor you may need to comment out &hpma_sensor, in static struct aqw_sensor *sensors[] = {.

Finally build the application by running the following commands.

Once built you’ll get to the end of a bunch of output. The end should look something like this:

Then plug in your nRF9160 Feather and either program using newtmgr or nrfjprog. I’ll include both here.

For programming directly over USB use newtmgr:

If you have a programmer setup, use nrfjprog

Then open up a serial console and make sure the board has booted properly:

If you’ve gotten some sensor measurements within the first 30 seconds, you’re golden!

You’re almost there! Let’s get a Grafana interface set up. If you already have Grafana this should be a very straight forward integration. If you don’t I recommend you check out Grafana’s hosted service. I’ve also written about setting up Grafana in a past post.

In order to get the streamed data from the nRF9160 Feather and Air Quality Wing, you’ll need to set up API credentials for your Golioth Account.

Navigate to the API Keys section and click Create a Key!

Make sure you have API Key selected and click Save

Finally you’ll get a window like the one below. Take note of your X-API-Key value and the project name. We’ll need both in a second!

Setting up your data source

Now let’s get over to Grafana.

Next you’ll want to change the Name to Golioth and also your URL to https://api.golioth.io/v1/projects/{your-project-id} where your {your-project-id} is the same one indicated earlier in the API key generation step.

Note do not include the /devices suffix. Insert the URL above as shown with your project identifier.

Finally go to the bottom and setup a Header under the Custom HTTP Headers section. Set the name to X-API-Key and the value to the API key generated earlier.

Then click Save & test. You should get a nice big Success check mark if things check out!

In this step, we’ll import a dashboard that i’ve already created. You can download it here:

The graphs should automatically pull data for your device and it should show some pretty graphs!

Now you can start playing around with the panels and tweak as you need to. More on creating the panel from scratch you can look at Golioth’s setup documentation here.

And that’s a wrap!

I hope this has been a useful introduction if this is your first time playing with Zephyr. Additionally, now that we have services like Golioth, I’m excited to see more people use it across different hardware platforms and projects.

I’m also excited to announce that the latest version of the nRF9160 Feather are available.

Some of the biggest changes include:

Some of the big changes include:

You can get some right now by heading over to my store. 🏬

Thanks for reading. If you have questions or run into problems the Circuit Dojo community is open and ready to help. Or, you can reach out to the Zephyr community on the Zephyr Discord Channel.